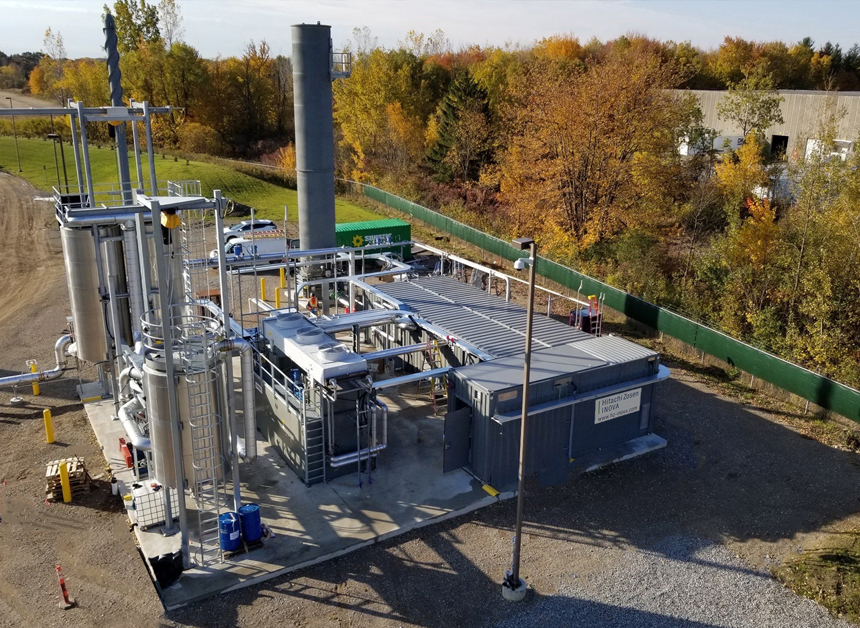 The largest membrane gas upgrading plant ever delivered by Hitachi Zosen Inova (HZI) has recently been handed over to StormFisher, who in turn have partnered with Enbridge Gas to inject low-carbon RNG into the company’s natural gas distribution system in Ontario, Canada. By taking over regular operation StormFisher can now extend its business case. It’s not just the size of the project in London, Canada, that makes it a special one.

Generating electricity from waste is not quite new in the city of London in the southern part of the Canadian province of Ontario. A local waste treatment plant has for years been producing biogas from all kinds of organic waste that is used to generate electricity in a combined heat and power unit. But now the biogas will also be upgraded to produce renewable natural gas: biomethane. The upgrading technology has been supplied by Hitachi Zosen Inova via HZI BioMethan, the German subsidiary is specialised in developing and constructing gas upgrading plants based on two different processes.

In London, the biomethane is produced by means of membrane-based gas permeation: under pressure the biogas is introduced into modules containing hollow fiber membranes made of high-performance polymers. In the modules the carbon dioxide (CO2) contained in the biogas is removed from the methane, which at the end of the process is extracted and – with the same quality as natural gas – forwarded to a feed-in station to be injected in the local gas grid.

This is the first gas upgrading plant in Canada to use this process. It enables upgrading capacities of 360-1,200 Nm³/h of raw biogas. This degree of flexibility is a special feature of the plant. By means of gas upgrading, the client can utilise the surplus biogas and generate additional energy. StormFisher intends to successively increase the volumes of waste accepted, so more biogas can gradually be fed into the upgrading system. For this reason, the flexibility to process varying raw gas feed capacities was a key factor in the awarding of the contract. The HZI plant covers a range of 30-100% feed capacity.

The project will thus enable the client to optimise the sustainable management of resources in the region, as well as contributing to the Canadian government’s climate policy and global decarbonisation efforts.

Pilot Project for North America
This project in Canada was HZI BioMethan’s first inter-company venture within the group, with the German gas upgrading pioneer developing and delivering the project in collaboration with HZI Canada in Toronto and HZI US, the group’s subsidiary in Knoxville, Tennessee. The adaptation of the technology to local market requirements set down in the ASME (American Society of Mechanical Engineers) Code and the Canadian standard paves the way for further growth in the US and Canadian markets. The Canadian project developer and HZI are already collaborating on another project to produce biomethane.
A second inter-company project is currently being developed in southern California. There, besides biogas upgrading, an additional technology from the HZI Group’s Renewable Gas portfolio is being used: producing biogas with Kompogas® dry fermentation. Generating energy from renewable resources is gaining in importance, and not just in this US state. HZI is increasingly positioning itself strategically as a one-stop provider, also spanning renewable gas. The portfolio contains the full range of technologies for producing and processing renewable gases in order to deliver solutions for all demands and requirements.